Our first post was always going to be about leadership. The topic of leadership pricks up the ears of the business world like nothing else. If we want to build our audience, and we do, then choosing to kick things off with any other topic would have been ridiculous. Everyone wants to be a leader. Or if they don’t aspire to be a leader in some grand sense, they certainly can think of a project or two where that bit of extra sway would ease a lot of frustration.

These days invisible leadership is a topic unto itself and is the subject of a number of popular books. Adding to this extensive popular literature, Business Review Weekly recently offered us “Don’t kid yourself : Six ways to be a more humble leader” (the internet loves its lists). This piece is short, intuitive, a little cheesy, and echoes the general refrain around invisible leaders; it implores us to recognize the importance of humility and the parallel danger of arrogance and grandstanding. Leadership, we are told, is undermined by too much bluster and too much self-confidence. What we are not told, however, is exactly why these things undermine leadership. There is a strong conviction that it does, as well as some potent examples, but the detailed mechanics of the process go unstated.

This is a crucial part of the story and is worth filling in. And as I will shortly show, understanding this detail improves our view of the bigger picture.

It is here that we begin leveraging the social identity approach. We start by understanding that influence is fruitfully defined as the process of one person’s ideas being adopted by others.[1] This is critical for our definition of leadership. We use the term leadership to describe a particular pathway to influence.[2] That is, influence by epitomizing what ‘we’ are.

This warrants some explanation. 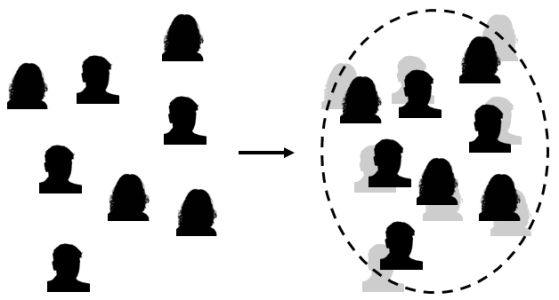 The presence of a psychological ingroup motivates members of that ingroup toward consensus.

There is an important social psychological mechanism that enables this powerful type of influence. It is detailed in self-categorization theory,[3] which is part of the social identity approach. To put it briefly, we understand ourselves (and our world generally), via a cognitive process called “categorization”. Or in other words, we understand ourselves as a function of who we are similar to and who we are different from. These are sometimes referred to as our “ingroups” and “outgroups”. Further, we expect groups, including our ingroups, to be coherent. That is, we expect a certain degree of uniformity; group members should think, act, and feel the same. If they did not, it wouldn’t be much of a group. Influence happens because of this expectation. More specifically, we seek to resolve the cognitive discrepancy; we are influenced when we notice ourselves standing out from the group to which we hope we belong. While we can of course choose to psychologically exit the group, we often choose instead to reposition ourselves as more similar to other group members.[4] In particular, we reposition ourselves toward group members who, as we understand it, are more central examples of our ingroup. Thus, we can usefully say that leaders are people who to us are seen as good examples of our psychological ingroups and who we seek to emulate.[5][6]

This should have intuitive appeal. Think about that manager or supervisor who really had an impact on you; someone who’s advice you really took to heart. Now think about what they represented to you. I am willing to bet that they were a good representative of a social category that you wanted to be in (e.g. ‘successful managers’, ‘high powered executive’, ‘area expert’). That is, they were a good representative of a psychological ingroup of yours.

Here we get the the heart of invisible leadership. The reason that ostentatious behaviour can undermine leadership is because leadership requires people to fall within the same cognitive category. If they do not then there is no psychological impetus toward the consensualization of ideas and beliefs. By being too proud, self-congratulatory, or individualistic, a person can ‘out themselves’ from the ingroup.[7] 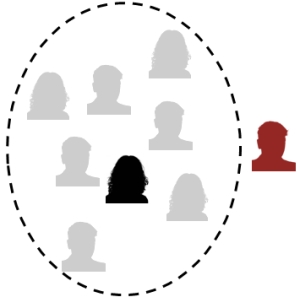 As promised, it is at this point that we get to be more right. We now understand why invisible leadership can be important, and why authors are correct to warn of the dangers of standing out too much. We can go further, however, and say that a leader’s invisibility is important only so far as it serves to maintain their perceived representativeness of the group. Aspiring leaders need to downplay the characteristics that are not also characteristics of the ingroup. But a leader can still stand out. They just need to stand out in terms of how central they are to the ingroup. Being distinguishable in this other sense will actually increase leadership potential.

This is not to say that this is an easy task. Determining how others perceive you requires a certain type of finesse. Not only that, but an aspiring leader needs to understand the ingroups that their potential followers use to define themselves. And this does not simply mean trying to be an ‘average’ member of the demographic groups that people belong to.[8] Psychological ingroups reflect the goals, motivations, and values of perceivers, and are constantly changing to reflect the changing social context of the perceiver.[9] Leadership is still achievable, and most of the time it occurs quite by accident. It is just that manufacturing leadership requires insight, artistry, and entrepreneurship.[10]

Here we have helped out with the insight.

[1] This may be contrasted with compliance, which does not require another’s ideas to be adopted.

[2] The merits of this particular definition we will discuss another time.

[7] The exception will be where pride, self-praise, and individualism are ingroup norms, but we will leave the apparent parodox here to another post.

One response to “Why exactly should we be “invisible leaders”?”