This post is our first that is wholly dedicated to a tenet of the social identity approach. That tenet is ‘cognitive categorization’.

What is this thing? What are its boundaries? What qualities does it have? Is it a table or an aardvark? These questions can only answered by determining whether ‘the thing’, whatever it is, is different from, or the same as, ‘other things’.

Let’s look at an example. In the below image is a collection of knives, forks, spoons. But forget for a moment that you know what cutlery is. 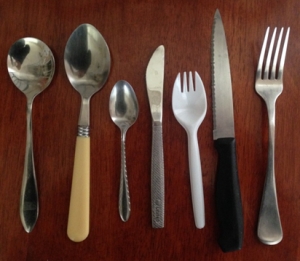 I knew my eclectic tableware collection would come in handy.

Without knowledge of common eating implements what we have in front of us is a wholly disorganized mess of items; each unique and different from the others, yet in many ways all the same. Can you see it? The buzzing confusion of features and shapes?

In order to get a conceptual grip on these things we need a way of appreciating patterns in the data. How do we establish that three round items can be classed together and distinguished from the other items? What do we need before we can give them a label (“spoons” perhaps) and focus on the potentially useful characteristics they share (e.g. can hold and transport liquids)?

In the first set the labels correspond to the length of the lines, while in the second the labels are random.

What Tajfel and Wilkes found was that the addition of a systematic categorization scheme (i.e. shorter lines labelled ‘A’ and longer lines labelled ‘B’) made participants reliably exaggerate differences at the group boundary. In other words, despite the same lines being presented to all participants, the difference between lines 4 and 5 was perceived as bigger when the organized ‘A’ and ‘B’ categories were present. They also found some indication that the differences within each category (e.g. within all the ‘A’ lines) were perceived as smaller. In sum, the participants found a way of ‘seeing’ the short lines vs. long lines.

Since those early studies accentuation effects have been replicated countless times in a variety of contexts. My personal favourite is the accentuation of interclass differences and intraclass similarities in computer generated fish.[5]

Looking back at my cutlery, the take home message is that our understanding of ‘stuff’ is not an inherent property of that stuff, but rather is a product of cognitive categorization. This means that something as simple as perceiving spoons requires some serious cognitive work. In particular, the detection of specific patterns in the stimuli and the subsequent suppression of the potential differences among the spoons (e.g. all the spoons are different sizes) and the exaggeration of the potential differences between the spoons and the items (e.g. only the spoons are round). Categorization, through accentuation, allows us to convert data into information.

Although I think you can predict where this is going… Spoiler alert! Self-categorization is just the cognitive categorization by a perceiver of themselves. That is, creating understanding of the self via the active perception of who ‘I’ is equivalent to and who ‘I’ is different from.

And maybe you already have an inkling of how these ideas connect. But maybe not. Maybe the connection between perceiving spoons and organizational behaviour is pretty damn opaque. Either way, stick around to find out what the social identity approach has to say.

3 responses to “Categorization: Knives, forks, spoons, and us”