Team Australia. Sounds good doesn’t it? A noble notion that we are, or should be, all part of the one national team, with the same values, the same goals and the same view about who we are and who we are not. Most of us probably wouldn’t regard the idea of a team as being controversial when discussing sports or in the workplace and it’s a safe bet that you have probably, at some time, identified as a team member. You may even have attended a team building workshop. How often does one hear the call to be a team player, to take one for the team, or to share in the team spirit? In many organisations, management generally perceive that teams are good for productivity, morale and success (although empirical evidence suggests otherwise, see for example Allen & Hecht, 2004 [i]). So, why has the Prime Minister’s comment, “You don’t migrate to this country unless you want to join Team Australia” been so controversial?

Although there are many background and foreground factors that might contribute to the controversy much of it seems to be about issues of definition and inclusiveness: What is meant by team? Who is in the team and who is out? What are the goals and norms of this Team Australia? Who decides? For those of you following this blog, you may have identified that these are issues of self-categorisation. I won’t go into a detailed explanation of self-categorisation as we have already discussed it here, but as a reminder, categorisation is the process by which we perceive people as similar to, or different from each other. Analysis from a self-categorisation perspective can explain why, in some circumstances, a leader’s call for all individuals and groups to pledge allegiance to the team can lead to cynicism and disengagement.

What are the conditions that lead to this cynicism? Empirical research, both in the field and laboratory, indicate that it is an outcome of perceptions of status, group public self-esteem and group permeability (that is, the ability for low status groups to move easily into high status groups) [ii][iii][iv].

This research shows that low status groups often perceive that they do not receive respect or worth from the broader community and that they lack influence and recognition. Think about this from a workplace perspective. Imagine that you work in a relatively low status team within an organisation and you have no easy ability to move into the high status groups. Maybe you are a porter in a large teaching hospital where it is apparent to you that the medical and management teams have high status and have the most influence. As a porter, a member of a low status group, how would you react to a hospital wide team-building program? Who would you think might benefit most from this program? How much influence do you think that your group might have over the content and planned outcomes of the project? In a study that looked at just this situation in a UK hospital[ii] it was found that while the high status groups were enthusiastic about the workplace development project, the lower status groups (porters, cleaning staff, caterers) resisted the project, had low participation rates and were less likely to progress through all stages of the project. In interviews with the low status groups a typical comment was:

“This is going to be another one of those situations where you tell us how wonderful everything’s going to be, and we get all excited, but nothing ever happens and nothing changes except we get fewer staff and more shit to deal with.”

Traditional models of team building either downplay group memberships (individuation) or they emphasise the interests of the superordinate group to create a sense of commonality rather than difference (assimilation). But, what is the outcome for the low status groups in our hospital in either of these approaches? As a porter in this hospital, in either model, what would you expect might happen in regards to your group’s concerns (issues, barriers, goals)? The problem is that traditional approaches don’t allow members of low status or devalued groups an opportunity to develop and articulate a voice about the issues that are important to them. 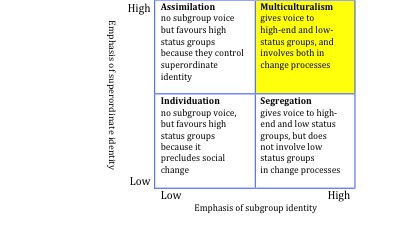 Although assimilation sounds like a great way to reduce conflict the key problem is who defines the goals, norms and identity of the group. In assimilation strategies high status groups tend to advance their interests at the expense of low status groups because it is the dominant group that has the greater ability to influence the definition of who we are, what we value and where we should be headed. Similarly, the individuation approach downplays the value of groups and so restricts the ability of low status groups to project a collective voice.

To say that we must all be on Team Australia leads to questions about whether this is really a call for assimilation. I am not certain this is the intention of the Prime Minister but it is this reading of Team Australia as implying assimilation that I think might be the reason for the controversy. We know from social identity research that assimilation can lead to a devaluing of the importance of low status groups and their issues and entrenches perceived low status and low public self-esteem. Instead of creating harmony Team Australia may lead to conflict due to its perceived exclusiveness and impermeability.

There is an alternative. According to social identity research [v] should a leader want to emphasise the superordinate group he or she needs to define the content of this group in a way that allows for and incorporates subgroup difference. The leader needs to celebrate difference and provide a place for different identity groups (in a later post we’ll discuss the ASPIRe methodology that can help leaders do this).  In Australia our success as a multicultural society is due to the fact that we have provided a place and a voice for people of different ethic and cultural backgrounds. Such a strategy of multiculturalism has been shown, in contrast to the strategies of individuation and assimilation, to be the one most likely to be successful in dealing with conflict and disengagement.

So, Team Australia is not necessarily a bad idea and perhaps should not be controversial. What is required though is that our leaders provide a clear and inclusive definition of what Team Australia means.

[i] Allen, N. J. and T. D. Hecht (2004). “The ‘romance of teams’: Toward an understanding of its psychological underpinnings and implications.” Journal of Occupational and Organizational Psychology 77(4): 439-461.